In Singapore, local food fish farms produce around 10 percent of Singapore’s consumption of food fish. As Singapore envisions production of 30 percent of Singapore’s nutritional needs locally by 2030, Singapore’s aquaculture industry needs to transform and adopt technology to raise productivity, strengthen climate resilience and overcome Singapore’s resource constraints. Some farms have already developed innovations such as floating closed containment farming systems and adopted Internet-of-Things (IoT) solutions. There is also an increasingly vibrant aquaculture R&D ecosystem that works closely with the industry to develop solutions and address technology gaps in the sector. In solving its own challenges, Singapore has the potential to become a leader in tropical aquaculture technology and develop innovations that can benefit the world. 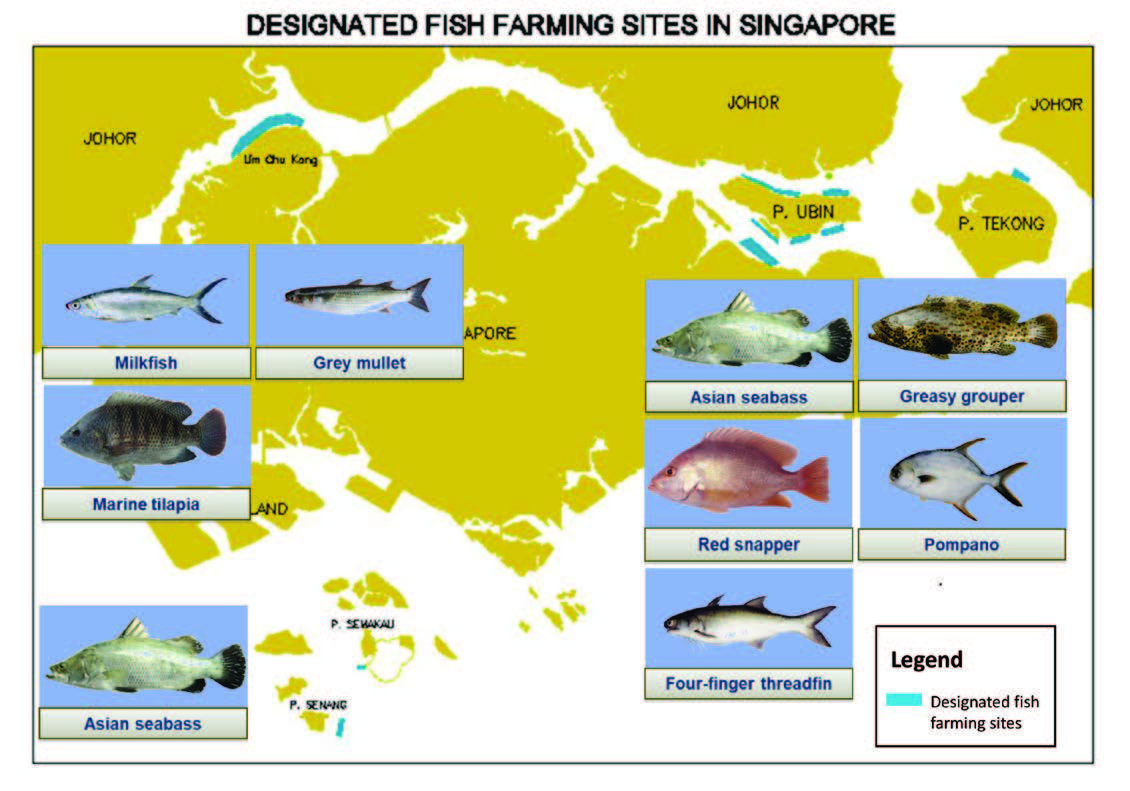 Aquaculture in Singapore can be categorized as land-based and sea-based. In 2019, Singapore produced about 4,700 t of foodfish from its 122 licensed foodfish farms. This constitutes around 10 percent of its annual total consumption of live and chilled food fish.

There are 110 sea-based farms in coastal and southern waters that contribute around 85 percent of local foodfish production (Fig. 1). Coastal farms are found within designated farming sites located along the Straits of Johor. Most coastal farms occupy farming sites that are about 0.5 to 1-ha in size. Coastal farming sites are generally sheltered and shallow at about 5-9 m deep, with some sites having slightly deeper waters of about 10-15 m deep. Most of the coastal farms practice traditional open net-cage culture and are made of wooden frame structures floated by 200-L HDPE drums (Fig. 2). 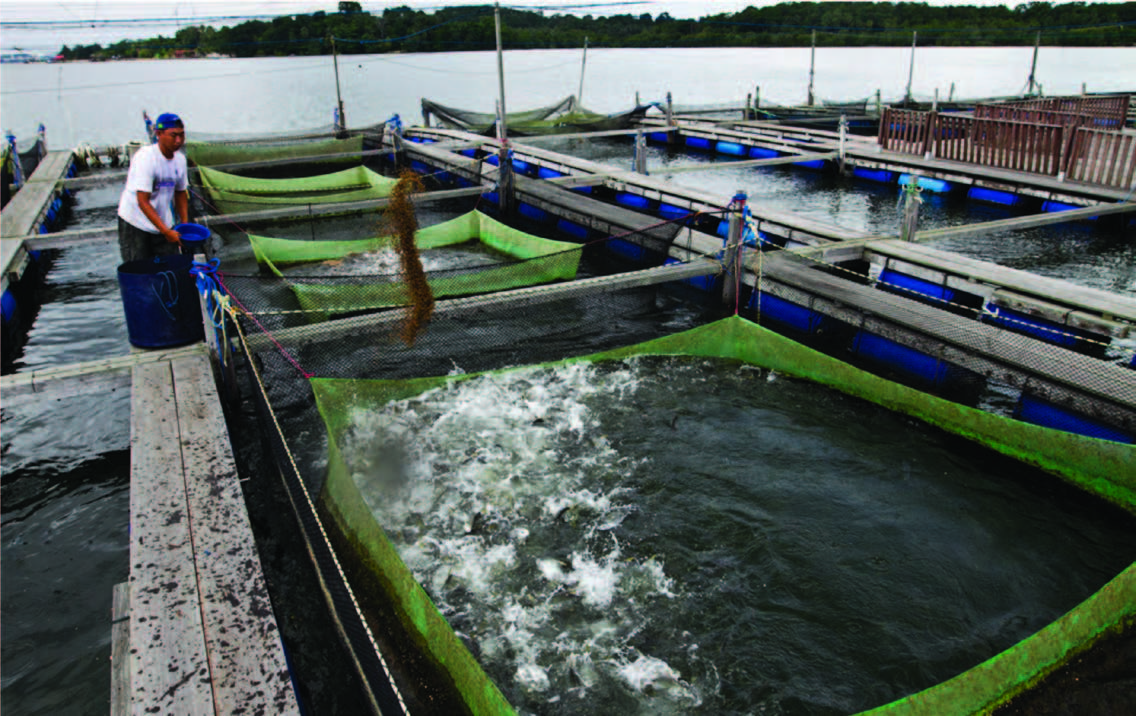 There are also fish farming sites in the southern waters of Singapore. Compared to coastal farming sites, these sites have relatively deeper waters at about 15-30 m deep, and the sites remain relatively sheltered. Barramundi Asia is Singapore’s only farm in the southern waters. It cultures Asian seabass, also known as barramundi, using Norwegian open cage technology (Fig. 3a). The farm also has a land-based nursery on Pulau Semakau that employs recirculating aquaculture systems (Fig. 3b).

FIGURE 4. Land-based farms in Singapore: (A) Tank-based and (B) open pond culture methods.

As a city-state that imports more than 90 percent of its food, Singapore is vulnerable to external shocks and global trends that impact food supply and safety around the world. To strengthen food security, Singapore is pursuing three broad strategies, also known as the three food baskets. These are “Diversify Import Sources,” “Grow Local” and “Grow Overseas.” For “Grow Local,” Singapore has a “30 by 30” vision, that is, to produce 30 percent of Singapore’s nutritional needs locally by 2030. To do so, Singapore’s agri-food industry will have to “grow more with less” by adopting innovative solutions, leveraging R&D and employing climate-resilient and sustainable technologies.

Aquaculture is one of the sectors that will contribute to Singapore’s “30 by 30” vision and there are several key challenges that the industry has to overcome. First, as a small country, Singapore has limited resources in terms of land, sea space and manpower. Second, farms have to deal with occasional adverse environmental conditions. Over the last decade, Singapore’s coastal fish farms have experienced two major episodes of harmful algae bloom (HAB) incidents, an oil spill incident resulting from a vessel collision, and occasional low dissolved oxygen conditions at the West Johor Straits (Fig. 5).

FIGURE 5. Environmental challenges faced by coastal fish farms. (A) The emergency deployment of canvas to protect fish stocks during a plankton bloom incident. (B) Farm worker using absorbent pads to remove oil from a net cage during an oil spill incident. (C) The deployment of oxygen cylinders for aeration during low dissolved oxygen conditions.

In recent years, several local farms have leveraged technology and innovation to overcome these challenges. In coastal fish farming, The Fish Farmer Pte Ltd have incorporated IoT solutions to deal with the low dissolved oxygen situations that its farms encounter. The farms are equipped with real-time water quality monitoring systems that sends an alert to the farmer when poor water quality conditions are detected. Mitigation measures such as battery-operated air blowers that are charged by solar panels can then be activated to aerate the water (Fig. 6). 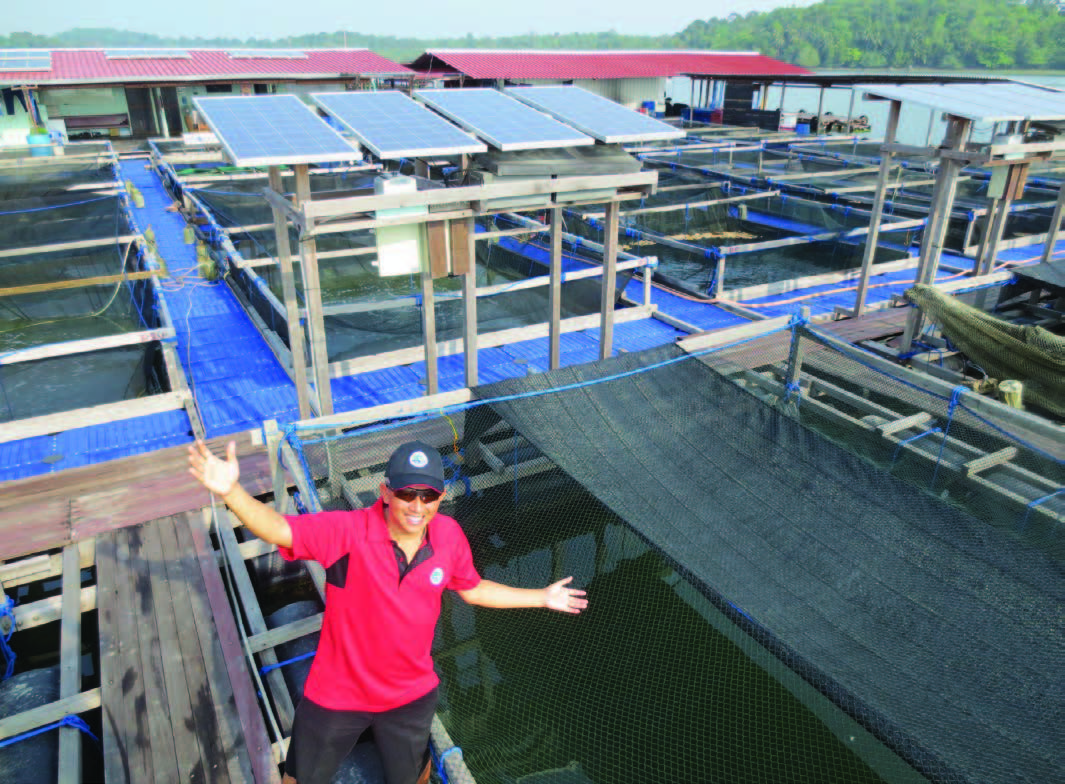 Coastal farms have also developed increasingly sophisticated floating closed containment systems that have the potential to transform coastal fish farming by rearing fish in a controlled environment that protects them from adverse conditions (Fig. 7). Singapore Aquaculture Technologies (SAT) was one of the farms that developed a proof-of-concept prototype comprising of 5-m3 capacity tanks floated on wooden platforms. This was developed in response to the then-Agri-food & Veterinary Authority of Singapore’s (AVA) call for proposals for closed containment aquaculture systems following the 2014 and 2015 HAB incidents (Fig. 8a). SAT’s solution was a flow-through system where incoming seawater is improved through treatment with mechanical filtration, UV sterilization and oxygenation before entering the culture tanks. This method allowed up to four times higher stocking densities at 60 kg/m3 compared to open net-cage farming that typically hold 15 kg/m3. More importantly, fish stocks are protected from adverse environment conditions. Improving on the earlier wooden platform-based prototype, SAT subsequently adapted a steel barge that is more robust and stable to support larger 70-m3 capacity tanks for efficient large-scale production (Fig. 8b). It also incorporated mechanisation and sustainability features such as automated fish grader and solar panels to power the farm. 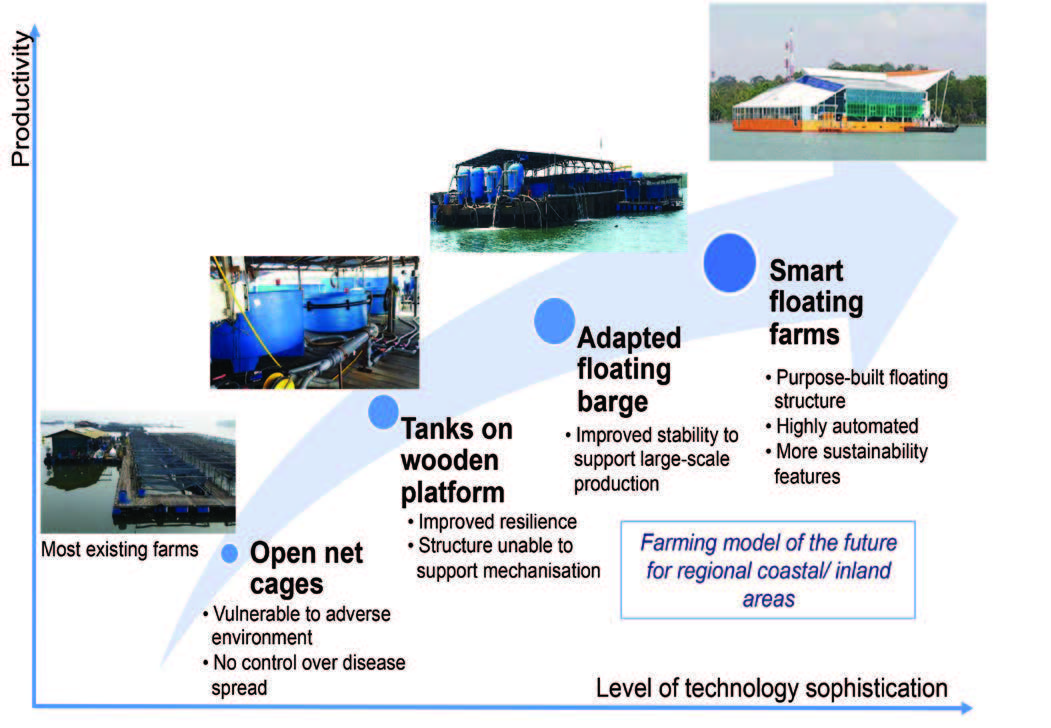 FIGURE 7. The transformation of coastal fish farming in Singapore.

The latest generation of floating closed containment systems in Singapore incorporates features to become highly automated or are purpose-built floating structures. In SAT’s latest, recently launched system, its Smart Floating Fish Farm incorporates self-adjusting control cycles, IoT (Internet of Things) and AI (Artificial Intelligence) to automate processes such as feeding, regulating flow rates of water and oxygen and monitoring of growth and heath of fish (Fig. 8c). Another local farm, the Aquaculture Centre of Excellence (ACE) developed a purpose-built floating closed containment structure, the EcoArk, that is designed to optimise the energy efficiency of the system and allows for solid waste to be removed before water is discharged into the sea (Fig. 9).

On land, Apollo Aquaculture Group (AAG) has developed a multi-tier vertical farming facility using recirculating aquaculture systems (Fig. 10) that allow the farm to culture multiple species such as shrimps, groupers and coral trout while maximising the land productivity of the farm. AAG’s new farm in Singapore will also incorporate sustainable features such as recycling the discharge from the farm to grow aquatic plants to minimize waste from the farm. Another land-based farm, Blue Ocean Aquaculture Technology (BOAT) has moved aquaculture indoors into an industrial building (Fig. 11). BOAT uses Vertical Recirculating Aquaculture System (VRAS) with nanobubble technology to farm freshwater species such as jade perch Scortum barcoo and tilapia within the urban environment.

In southern waters, Barramundi Asia has been making significant inroads towards making Asian seabass the “Salmon of the Tropics.” It has a fully-owned subsidiary, Uvaxx, a fish health company, that develops autogenous vaccines for Asian seabass. Barramundi Asia has also recently acquired Allegro-Aqua, which was set up to commercialize the faster-growing St John’s Seabass, an outcome of a selective breeding program on Asian seabass embarked on by the then-AVA, now Singapore Food Agency (SFA), and Temasek Life Sciences Laboratory in 2003. This merger allows synergies to be reaped by combining the respective strengths in the development of vaccines against Asian seabass diseases and faster growing seabass to improve the farming of this species.

R&D will continue to play a key role to plug technological gaps and Singapore has allocated S$ 144 million towards the funding of a Singapore Food Story R&D program to support the “30 by 30” vision (Singapore Food Agency 2019). One of the areas funded under this program includes tropical aquaculture, with a focus on developing solutions in genetics, nutrition and disease and health management.